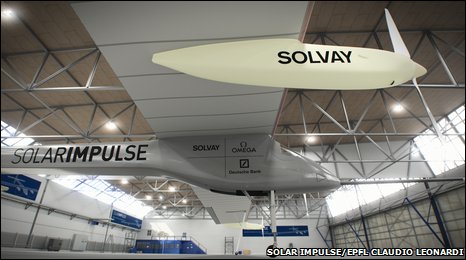 Swiss adventurer Bertrand Piccard has unveiled a prototype of the solar-powered plane he hopes eventually to fly around the world.

The initial version, spanning 61m but weighing just 1,500kg, will undergo trials to prove it can fly at night.

Dr Piccard, who made history in 1999 by circling the globe non-stop in a balloon, says he wants to demonstrate the potential of renewable energies.

He hopes to fly a later version of the plane across the Atlantic in 2012.

The flight would be a risky endeavour. Only now is solar and battery technology becoming mature enough to sustain flight through the night – and then only in unmanned planes.

But Dr Piccard’s Solar Impulse team has invested tremendous energy – and no little money – in trying to find what they believe is a breakthrough design.

“I love this type of vision where you set the goal and then you try to find a way to reach it, because this is challenging,” he told BBC News.

The HB-SIA has the look of a glider but is on the scale – in terms of its width – of a modern airliner.

The aeroplane incorporates composite materials to keep it extremely light and uses super-efficient solar cells, batteries, motors and propellers to get it through the dark hours.

Dr Piccard will begin testing with short runway flights in which the plane lifts just a few metres into the air.

As confidence in the machine develops, the team will move to a day-night circle. This has never been done before in a piloted solar-powered plane.

HB-SIA should be succeeded by HB-SIB. It is likely to be bigger, and will incorporate a pressurised capsule and better avionics.

It is probable that Piccard will follow a route around the world in this aeroplane similar to the path he took in the record-breaking Breitling Orbiter 3 balloon – travelling at a low latitude in the Northern Hemisphere. The flight could go from the United Arab Emirates, to China, to Hawaii, across the southern US, southern Europe, and back to the UAE.

Although the vehicle is expected to be capable of flying non-stop around the globe, Piccard will in fact make five long hops, sharing flying duties with project partner Andre Borschberg.

“The aeroplane could do it theoretically non-stop – but not the pilot,” said Dr Piccard.

“We should fly at roughly 25 knots and that would make it between 20 and 25 days to go around the world, which is too much for a pilot who has to steer the plane.

“In a balloon you can sleep, because it stays in the air even if you sleep. We believe the maximum for one pilot is five days.”

The public unveiling on Friday of the HB-SIA is taking place at Dubendorf airfield near ZÃ¼rich.

“The real success for Solar Impulse would be to have enough millions of people following the project, being enthusiastic about it, and saying ‘if they managed to do it around the world with renewable energies and energy savings, then we should be able to do it in our daily life’.”