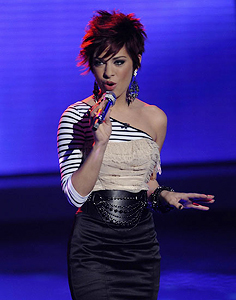 It’s always tough to be the first to go.

Lacey Brown, the 24-year-old from Amarillo, Texas, learned that lesson Wednesday night when she was the first of the 12 “American Idol” finalists sent home.

While her ouster may not have been a surprise, the biggest revelation of the night was that the controversial judges’ save was brought back â€” with a twist.

The move, which was introduced last season, gives the judges the chance to rescue the lowest vote-getter. The decision to use the save must be unanimous, and it can only be used once. The week after it’s used, two contestants go home. Once the field is reduced to five, the save is forfeited.

Last season, the lowest vote-getter was forced to sing the song that landed him/her at the bottom â€” not the best showcase of his or her skills. This season’s new twist is that the singer can pick from any song performed during the past weeks. Brown wisely chose to sing Brandi Carlile”s “The Story,” her best performance to date. It just wasn’t enough.

The judges smartly didn’t use the save on Brown, since they probably wanted to reserve the drama for later in the season when one of the favorites is at risk for elimination (and one invariably does â€” just ask Chris Daughtry).

Also in the bottom two was Paige Miles, Brown’s “Idol” roommate. Miles battled laryngitis this week, but her rendition of “Honky Tonk Woman” was good enough to keep her alive.

Katie Stevens, the 17-year-old talent who Kara DioGuardi thought could win the title, continued to get mixed messages from the panel. DioGuardi told her to focus on R&B, Cowell preferred country, and Randy Jackson said pop. Even less helpful was Ellen DeGeneres’ tongue-in-cheek advice to choose mariachi music.

The two remaining guys, Andrew Garcia and Tim Urban, received little praise. Urban was in the bottom three after his bizarre reggae-inspired performance Tuesday â€” but likely was saved by the teen girl vote.

Season 7 winner David Cook showed the Season 9 hopefuls how it’s done with a rocking rendition of “Jumping Jack Flash.” Two other breakout singers also performed during the hourlong show: Orianthi and Ke$ha. The latter paraded around the stage in a Native American headdress and war paint. Ke$ha tried be a fashion risk-taker, but ended up coming across as a Lady Gaga wannabe. No word yet on what the remaining 11 finalists will be singing next week, but hopefully it’ll be a little more contemporary than The Rolling Stones.