Itâ€™s already known as the place where dreams come true. Now Disney World is giving the nickname a whole new meaning with its launch of The American Idol Experience.

The new attraction at Hollywood Studios gives park visitors a unique opportunity to experience the different stages of the American Idol journey, from auditioning for casting directors and producers, to getting help from hair, makeup and voice coaches, to performing live in front of three judges and massive audience with the power to take them to the top.

â€œThere are a couple of layers to it,â€ Director of Creative Development Reed Jones told FOXNews.com. â€œSome of our guests will get the opportunity to be on stage and perform for thousands of guests a day, and then thereâ€™s the point of view of the audience who gets to watch and vote for their favorite singer.â€

Those audience members vote by hitting a number on a keypad located on the right arm of every seat in the theater.

â€œWe have our preliminary shows throughout the day and then at the end of the day we take everyone through the day who got the most votes in their preliminary shows,â€ Jones explained. â€œAll seven of those people compete in our final show, and then the person who wins the finale show wins a dream ticket and gets to go the Idol auditions of the Idol show and cut to the front of the line.â€

The prize is no dud. That ability to head straight to the judges and skip the preliminary rounds of the hit showâ€™s audition process significantly increases a competitorâ€™s chances at making it through to Hollywood.

â€œSomething like this is awesome,â€ American Idol Season 4 winner Carrie Underwood said. â€œThey get to come and live their own Idol experience and feel what itâ€™s like, and hopefully you get a fast track to the actual real deal Idol auditions.â€

And Underwood suggested the benefits go beyond just skipping a few rounds. â€œThey may even have a leg up, because theyâ€™ve kind of been on the stage and stuff before,â€ she said.

But what might be even more impressive than the opportunity the attraction gives Idol wannabes is just how much the American Idol Experience theater resembles the real thing.

â€œItâ€™s amazing how real the set looks on the inside, we were all blown away,â€ Season 2 winner Ruben Studdard told FOXNews.com.

Season 7 winner David Cook said it all brought back some interesting memories:

â€œItâ€™s eerie, you know Iâ€™ll walk on stage and feel completely transplanted,â€ Cook said. â€œI keep waiting on Simon to tell me itâ€™s a karaoke performance â€¦ itâ€™s about as close to Idol as your going to get without actually being on Idol.â€

And Season 1 Runner-Up Justin Guarini thought the attraction showed just how much the show has grown â€¦ in more ways than one.

â€œIt brought back a lot of memories â€” mostly of the fact that my stage looked nothing like that. It was about the size of a postage stamp compared to the stage they have nowadays,â€ Guarini joked.

As for the judges panel, they too bare a striking resemblance to the shows veterans Randy Jackson, Paula Abdul and Simon Cowell.

â€œWe have the hip industry insider and nurturing soul, and then we have the one thatâ€™s a little more frank,â€ Jones said.

Staying true to that nurturing persona, Abdul had nothing but rave reviews for the American Idol Experience.

â€œItâ€™s an exciting collaboration,â€ she said on the red carpet. â€œIt shows you how big American Idol is and itâ€™s stood the test of time.â€

To audition for the American Idol Experience you can sign up in person or online at www.disneyworld.com/Idol. The attraction opens to the public Saturday, while the real American Idol opens its voting to the people Tuesday night. 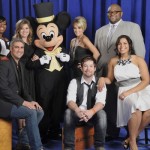 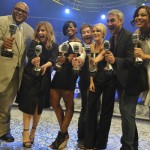