Earlier this month, as Mike Trogdon was going about his routine as director of operations for postal services at Duke University, he ran across something rather startling: a letter from Salem, Va., postmarked Feb. 12, 1934.

He told Yahoo! News that his first thought was “Where in the world could this have been for all these years?”

The letter â€” which bore a 2-cent stamp and a 1-cent stamp â€” was addressed to a “Miss Margaret Davey c/o Duke Hospital, Duke University.” 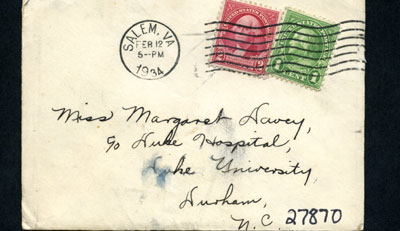 Trogdon checked the universityâ€™s records for any mention of that name in the employee database. When that came up empty, he decided to open the envelope. Inside he found a Valentine’s Day card adorned with numerous hearts and a giraffe. 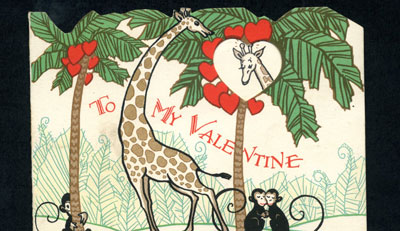 The message read: “In the race for my affection, you win by a long neck, so be my valentine!!” 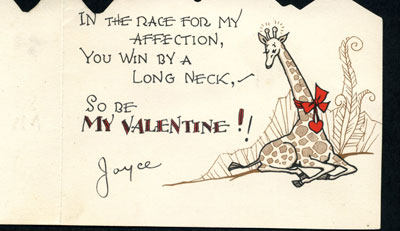 At the bottom of the card was a signature: “Joyce.”

Trogdon contacted the school’s alumni department to see if anyone named Margaret Davey had attended Duke in 1934, and indeed she had. 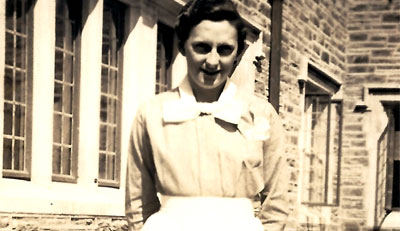 Davey had graduated from the Duke School of Nursing in 1935, went on to enjoy a long career as a registered nurse in Virginia and Florida, and married a World War II veteran. Together they raised a son and daughter.

But sadly, the dig for information about Margaret Davey revealed something rather unfortunate: She died in January of this year at the age of 96 â€” just two months before her Depression-era valentine caught Trogdonâ€™s eye.

Still, Trogdon was determined to get the word out. He contacted Leanora Minai, the school’s director of communications and editor of its employee newsletter. She tracked down a few of Davey’s surviving family members, including her son, and they set about trying to crack the other mystery of the card: Who had sent it? Eventually, they established that in 1934, Margaret Davey had a 6-year-old niece named Joyce living in Salem. Joyce â€” now Joyce Galbraith Colony â€” turns 82 in April and lives in Charlottesville, Va.

“My mother wrote both the envelope and the ‘Joyce’ signature inside,” Joyce Galbraith Colony told Minai in a piece for Duke Today. Colony’s mother, Florence, was Davey’s older sister. “She was my favorite aunt.”

One mystery will probably remain unsolved, though: just where the card has been hiding these past 76 years. Trogdonâ€™s best guess is that it fell behind a mail counter, where a vigilant postal worker finally retrieved it.

But that doesnâ€™t account for another recent revelation: A second envelope addressed to Margaret Davey at Duke University has also recently surfaced at the U.S. Postal Serviceâ€™s Processing and Distribution Center in Raleigh, N.C. â€” and it, too, was signed by someone named Joyce. The missive was postmarked in Salem on Jan. 15, 1935 â€” nearly a year after Joyce had sent off her valentine. Postal officials sent this wayward letter to Margaret Davey’s other niece, and included an explanatory note.

“We believe it may have been left in a mailbag and overlooked by our personnel who emptied the contents,” the note read. “Occasionally, an envelope may stick to the seam inside a bag.”

The missing-mail saga is already causing a stir around the Duke campus â€” even as the student body is obsessed with how far the schoolâ€™s famed Blue Devils basketball squad will go in this yearâ€™s NCAA tournament. Davey no doubt would have enjoyed hearing her name crop up amid all the hoops mania, Minai suggests.

“Margaret was an avid Duke basketball fan,” Minai told Yahoo! News, proudly noting that she kept “a poster of the team, signed by Coach K, above her bed in the nursing home.”