‘Dora The Explorer’ Lawsuit Alleges Star was Cheated out of ‘Millions’

Children’s bilingual, animated, interactive, adventure series featuring Dora, a 7-year-old Latina girl who lives inside a computer. In each episode, Dora and her best friend, a monkey named Boots, invite preschoolers on an adventure. Each step on the journey presents some kind of problem or puzzle, and Dora and the viewers must think their way to the solution. Dora is bilingual and uses her ability to speak Spanish to communicate with her friends and forge ahead. She demonstrates that speaking Spanish is not only a valuable tool, but also a source of pride.

For most parents, Nickelodeon’s “Dora the Explorer” is the innocent story of an inquisitive little girl who navigates the world with the canny use of a talking backpack, a talking map, and a monkey. (The monkey also talks.) But would parents be so quick to park their toddlers in front of the show if they knew they were exposing their kids to the fruits of what may be unfair labor practices?

The New York Daily News reports that the show’s star â€” 14-year-old Caitlin Sanchez, the voice of Dora â€” has brought a lawsuit against Nickelodeon, claiming that she has been cheated out of potential income from the show. According to Sanchez’s lawyer, John Balestriere, the contract Sanchez was (allegedly) pressured to sign â€” not just by representatives of Nickelodeon but by her own agent â€” was “convoluted and inscrutable,” and cheats her out of “millions, possibly tens of millions” of profits he feels she is entitled to. 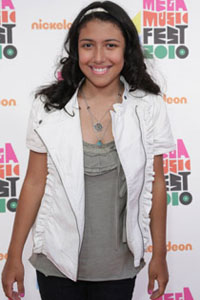 Though one’s response to the story may be that if Sanchez didn’t understand what she was signing, she should have sought counsel at the time, the dollar amounts reported are actually pretty shocking. Sanchez was paid $5,115 per episode (but was not compensated for the “hundreds of hours” it took to record them), and promoted the show by traveling to personal appearances around the country, for which she was paid a “meager travel stipend of $40 a day.”

By contrast, the AP reported that, by Nickelodeon’s own estimation, the “Dora” brand has generated $11 billion in sales worldwide.

The suit also claims that Sanchez was threatened with the loss of the role if she didn’t sign her contract as is â€” which, under the circumstances, might have been especially alarming. Also, Sanchez is not the first actress to voice Dora: Kathleen Herles originated the role, but left the show in 2008. In an interview with the voice-actor blog, Voices.com, Herles says she retired as Dora upon her graduation from high school, saying it had been a challenge to maintain her “7-year-old voice.”

Michael Fricklas, general counsel to Viacom (Nickelodeon’s parent company), calls the suit “completely without merit,” but if it does make it to a courtroom, and if the contract is as restrictive as Sanchez’s lawyers claim, he’ll need to explain the apparent gap between the revenue the show generates versus the compensation it has offered its star.

In this composite image provided May 20, 2010 courtesy of Debbie Groben and FreakingNews.com, is an image of Nickelodeon cartoon Dora the Explorer created late last year by Debbie Groben of Sarasota, Fla., for a contest for the fake news site FreakingNews.com. The image, and others like it that question or make fun of the Latina cartoon character's immigration status and country of origin, have been in wide circulation since Arizona passed a controversial immigration law. Groben, who is against the immigration law, said she just created it out of good fun and didn't know it would enter the immigration debate. (AP Photo/Courtesy of Debbie Broben and FreakingNews.com)

In her police mug shot, the doe-eyed cartoon heroine with the bowl haircut has a black eye, battered lip and bloody nose.

The doctored picture, one of several circulating widely in the aftermath of Arizona’s controversial new immigration law, may seem harmless, ridiculous or even tasteless.

But experts say the pictures and the rhetoric surrounding them online, in newspapers and at public rallies, reveal some Americans’ attitudes about race, immigrants and where the immigration reform debate may be headed.

“Dora is kind of like a blank screen onto which people can project their thoughts and feelings about Latinos,” said Erynn Masi de Casanova, a sociology professor at the University of Cincinnati. “They feel like they can say negative things because she’s only a cartoon character.”

It’s not the first time a children’s character has been dragged into a serious debate.

In the late 1990s, Tinky Winky the Teletubby, a purple children’s TV character with a triangle antenna — was called out by Christian leaders for being gay. Sesame Street roommates Bert and Ernie are often involved in statements on same-sex marriage.

In Dora’s case, she’s an easy target as discussion ramps up on how lawmakers should address the estimated 12 million illegal immigrants living in the United States.

For about a decade, the pint-sized Latina character has taught millions of children the English alphabet, colors and Spanish phrases on a Nickelodeon TV show and through a global empire. Her smiling cherub face is plastered on everything from backpacks to T-shirts to fruit snacks.

But since the passage of the Arizona law — which requires authorities to question people about their immigration status if there’s reason to suspect they’re in the country illegally — Dora’s life and immigration status have been scrutinized and mocked.

Several websites, including The Huffington Post, have narrated Dora’s mock capture by immigration authorities. One picture circulating on Facebook shows an ad for a TV show called “Dora the Illegal Immigrant.” On the Facebook page “Dora the Explorer is soo an Illegal Immigrant,” there are several images showing her sailing through the air over the U.S.-Mexican border.

Many of the Dora images assume the Latina character is an illegal immigrant from Mexico.

But that’s where it gets complicated.

Representatives from Nickelodeon declined to comment on Dora’s background, and her place of birth or citizenship have never been clear.” She has brown skin, dark hair and speaks Spanish with an American accent.

“She’s always been ambiguously constructed,” said Angharad Valdivia, who teaches media studies at the University of Illinois and has explored the issue. “In the U.S. the way we understand race is about putting people in categories and we’re uncomfortable with people we can’t put into categories.”

Dora lives in an unidentified location with pyramids that suggest Mexico, but also tropical elements such as palm trees and her friends, Isa the iguana and Boots the monkey. Does that mean she’s from South America or Florida?

Then there’s oak trees and her fox nemesis Swiper, which are more common to the American Midwest.

The show often plays Salsa-like music, which has some roots in Cuba and is popular across Latin America.

Even the voice actresses behind Dora don’t provide insight.

The original Dora voice belonged to Kathleen Herles, whose parents are from Peru. Dora is currently voiced by actress Caitlin Sanchez, a New Jersey-born teen who calls herself Cuban American; her grandparents are Cuban.

As for the mug shot, it’s been around since late last year, when Debbie Groben of Sarasota, Fla. created it and entered it in a contest for the fake news site FreakingNews.com.

Since debate over the Arizona law heated up the nation’s immigration debate, it’s been e-mailed and texted widely and used on signs at rallies.

“My intentions were to do something funny, something and irreverent,” said Groben, who said she opposes Arizona’s law. “I actually like the little kid.”

The issue appears to have resonated little with Dora’s biggest fans, the millions of parents and their children who seem mostly unaware of the discussion encircling their beloved cartoon.

Altamise Leach, who has three children, said Dora’s ethnicity and citizenship are irrelevant.

The stay-at-home mom credits the cartoon with helping teach her children team work. She even threw her 3-year-old daughter a Dora birthday party, complete with a Dora-like adventure, Dora cake and a woman who dressed up as Dora.

“We have so many diverse cultures, let’s try to embrace everybody,” Leach said. “She puts a smile on my daughter’s face, that’s all I want.”

“I just thought she was a cartoon character that spoke Spanish,” the Flint, Mich., man said.

Nickelodeon is owned by Viacom Inc.

The 7 Steps of Hand Washing